Our staff provides incredible leadership to our worship gatherings and our church life.  Our lay leaders work with commitment and caring to enable the church to continually live out its vision.

Bio: David has been our pastor since 1988.  His work on his doctorate, in the area of Arts and Theology, was both a testimony to his own desire to continue to grow in his walk with God, as well as an extension of his interest in the arts and his commitment to bring the arts into the life of the church is many ways.  David's previous work in ecumenical ministry has given him an enduring appreciation for the gifts that all of God's people have to offer to one another.  David and his wife, Helen, share their many gifts in order to enhance the life of the congregation, while at the same time being grateful for the love, care and support that they have received throughout the years from a congregation that is truly a church family. 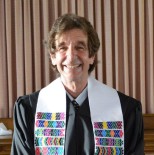 Bio: Jim served as pastor of the Sunset Park Christian Church for the past ten years.  As our two congregations have merged, Jim has stepped into the role of Associate Pastor.  In addition, Jim is our first Artist-in-Residence, with a focus in the area of theatre.  Jim is a screenwriter and playwright, and will be offering a course in screenwriting in early 2018.

Bio: Cathy has been our Choir Director for the past seventeen years, bringing a range of music and musical styles to our worship gatherings.  The choir meets for rehearsal on Sunday mornings at 9:30 a.m.

Cathy has been a member of the Los Angeles Valley College (LAVC) Theatre Arts faculty for the past 10 years.  She received a BFA in acting from West Virginia University and an MFA in scenic art and design from the University of Minnesota.  She also studied for a year at Alvescott College in Oxford, England.

In addition to being on the theater faculty at Rockford College in Illinois, and California State University at Northridge, she has spent the better part of her adult life schlepping suitcases throughout the USA while performing in the National Tours of The Woman of the Year (with Lauren Bacall), CATS, 42nd Street, and Crazy for You.  She played Anytime Annie in the Broadway company of 42nd Street.  Her hysterical performance in the long running San Francisco production of COLE! won numerous awards including the prestigious Bay Area Critics’ Award and a Dramalogue Award for best actor.

Bio: Alan is an accomplished and well-recognized composer, the Conductor of the Alan Chan Jazz Orchestra, and our pianist.

Alan's music often takes inspiration from his life experiences as a resident in America, East Asia and Europe.  His genre-shaking works can be heard in an array of venues, as well as at conferences and festivals.  Alan has received awards and fellowships from ASCAP, ArtEZ (Netherlands), New Music USA and the Percussive Arts Society (PAS), among others.  His 17-piece Alan Chan Jazz Orchestra released their "Shrimp Tale" debut album in the summer of 2014.

Thoughts from Our Pastor

We invite you to worship and study with us, and to rejoice in the beauty of being a part of a community of faith that welcomes all.

Everything that the church does should reflect the grace of God, and the teachings of Jesus, specifically that we are all loved, all welcomed into the family, and all given gifts for the bringing of grace into the world.  I invite you to come and experience the welcome that we feel from God and that we extend to all.  Our worship is open, the communion table is open because it is Jesus' table and not ours, and our hearts are open to what God is doing among us.